Grant on Permissions, not Roles

Symfony uses a very flexible voter approach to grant access for a user. As this is often based on domain-specific requirements and decisions, the voters that come with Symfony are very basic. I would even argue that it’s better if you not use them, and only rely on custom security voters.

In Symfony security, the string ROLE_USER can actually mean a lot of things, let’s first establish a common meaning:

What you pass into isGranted() calls is a security attribute. It can start with ROLE_, but any other text is possible as well.

A user has security roles. These are returned by UserInterface#getRoles() and always start with ROLE_.

The roles setting in your access control is passed into AccessDecisionManager#decide() (which is also what isGranted() uses). While the setting is named “roles”, this is actually a security attribute.

By default, Symfony’s election is “affirmative”. This means that if one voter votes for GRANT, the user is granted. This strategy can be changed using security.access_control_manager.strategy.

If you call isGranted() in some way, a small election organized by Symfony Security takes place. Each voter votes GRANT, DENY or ABSTAIN. Voters vote for a specific security attribute, with some optional context (the 2nd argument of isGranted()).

Voters are powerful, but, as said in the intro, often depent on lots of business logic. This is why Symfony cannot provide many voters. To make the security system work, it comes with two very primitive voters: RoleVoter and RoleHierarchyVoter.

These voters activate as soon as the security attribute starts with ROLE_ (e.g. isGranted('ROLE_USER') or isGranted('ROLE_ADMIN')). They check if the current user has this role (or if the role hierarchy contains this role).

What’s wrong With Voting based on Roles?

Voting on a role is very easy: It’s supported by default and gets the job done. Yet, it doesn’t add any flexibility. Also, complex cases result in a lots of code in a controller and often code duplication.

Roles belong to authentication (identification), rather than authorization. 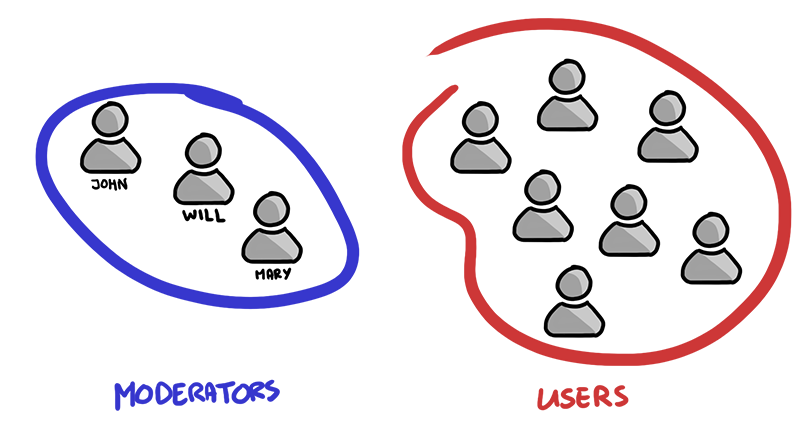 Roles defines the role (or function/task) of this user on the website. Someone might be the “moderator” on this forum, just a regular visitor or some premium plan member. That’s their role. Roles allows your application to group different users together. This makes granting permissions easier. For instance, it’s difficult to describe that users John, Mary and William are allowed to edit all posts. It’s easier to group them as being “the moderators” of this website. You can then grant the permissions “edit all posts” to the “moderators” role.

So rather than using roles as permissions, you relate permissions to specific roles. These permissions are then voted on by a custom voter. This allows you to change permissions throughout your code base easier and keep your controllers thin.

For this example, let’s create a voter for a blog post. We want to end up with a call like isGranted("POST_EDIT", $blogPost). The voter should then decide if the current user is allowed to edit the blog post. They should be allowed if any of these is true:

Do you see how we now relate the role of the user to the specific permission of editing a blog post?

If you don’t have the maker bundle, either install it or create a PHP class that extends the Voter class.

So the solution is to create your own voter. It’s a PHP class implementing Symfony’s VoterInterface. For easy usage, there is an abstract class named Voter. If you have the MakerBundle installed, you’re lucky:

Specify if the Voter Supports this Call

If the voter indicated that it supported this call, Voter#voteOnAttribute() is called. This method implements the permission logic:

As you see, in the voter we do call decide() with a role. But that’s fine, this class is meant to relate permissions (POST_EDIT) to a user’s role on the website.

We can now use isGranted('POST_EDIT', $blogPost) in our application to check if the user is allowed to edit the blog post. The access decision manager will call our custom voter to decide on this. If we ever need more complex logic to check, we only have to update the code in the voter.

It’s often a good idea to create one voter per entity. This voter can be extended to also vote on POST_CREATE, POST_DELETE, etc. To check if a Create button should be shown, I recommend passing the FQCN as context as there is no object yet (e.g. is_granted('POST_CREATE', 'App\Entity\BlogPost')).

Make your Voters Dynamic (Access Logic in the Database)

This example is just to illustrate the flexibility of the Voter principle. It isn’t necessarily battle-tested or recommended for production usage.

In the most generic way, you can create a Permission entity that specifies which roles are required for a specific security attribute. It may also use Symfony’s ExpressionLanguage component) to check additional conditions: